Project: Reinstating of the network of tunnels that run underneath the gardens of Shibden Hall. Building of a spine wall that run externally and internally of Shibden Hall visitor centre.

Shibden Hall, set in 37 hectares of the Shibden valley, is a 600 year old medieval timber-framed manor house. This Grade 2 Listed 15th century house is one of England’s oldest and was built in 1420, five years after the Battle of Agincourt. For the past decade Shibden Hall Park and its many attractions have been part of a huge Lottery funded restoration project with the gardens, boating lake, tunnels and visitor centre all being fully restored.

Below the front garden is a network of tunnels that were originally built for the servants and gardener to link up their quarters to Shibden Hall. The stonework was in a very poor state with much of the tunnels’ structural integrity compromised. We were tasked with reinstating the network of tunnels and their entrances back to a fully functional part of Shibden Hall’s visitor attractions. Before any work commenced, the existing stonework was numbered and logged to ensure the finished project was an exact restoration of the existing tunnel.

We were also asked to build a spine wall in the café/visitor centre. The wall was to take on the appearance of a dry stone wall which commenced externally alongside the seating area, continuing internally to form the gable end of the café area. To create the look of a dry stone wall, the stonework was back bedded with mortar with just the front leading edge of each stone being left “dry”.

The stonework for the spine wall was supplied by our sister company Yorkshire Stone Supplies. 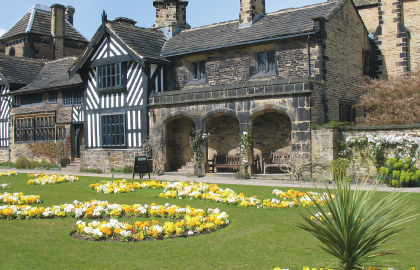