Set in wonderful wooded grounds on the outskirts of Thirsk. William Birch and Sons Ltd approached us with a package for all the stone masonry work.

The project comprised of all the external works and some restoration work to the main hall. The lower part of the garden was designed to create dry stone walled garden terraces with a large flight of stone steps leading to the water feature. A large spine wall was built that stretches from the swimming pool towards the house, complimented with chamfered stone copings. Set against the new turf it gives a striking appearance which is aesthetically pleasing to the eye.

The boundary walls were constructed using dry stone walling methods and traditional mortar walling using a lime mortar mix. All the mortar walls were capped with ornate, stone copings which were chamfered to create a coping that not only looked stunning but alleviated any rain water issues by directing the flow into the soiled areas. Numerous styles of coping were used with varying depths and shapes, where the two different copings meet, our skilled banker mason shaped the two differing stones to match perfectly.

The work to the main hall included an ashlar stone wall to the base of the orangery and a new build to several main walls which formed the offices that stood adjacent to the hall. The front façade of the hall had new ashlar stone replaced where the existing stone had become dilapidated due to inclement weather and old age. 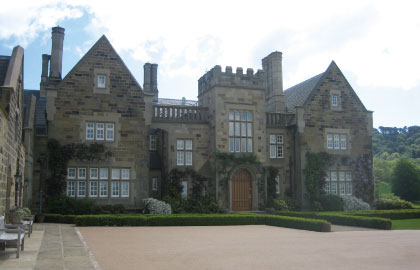